Addison and Narelle's AT Journey

At Indigo’s annual staff development breakfast last year, we were privileged to hear from Narelle, mother to nine-year-old Addison, who has Rett Syndrome, about how assistive technology has supported Addison to be the ‘vibrant young lady that she is’.

Narelle is a dedicated advocate for her daughter; and continues, with the support of Indigo (formerly Independent Living Centre WA, as referred to by Narelle) and other organisations to seek the assistive technology and services Addison needs to live a full life.

Addison is our middle daughter and is nine years old. Our first involvement with the ILC (now Indigo) was when Addison was around three years old. Although our interactions have been sporadic over the years, we have a lot to be thankful for from our visits with therapists or grants we have received.

Addison was diagnosed with Rett Syndrome just after her 2nd birthday. She had global development delay, never reaching the milestones of crawling or walking. She was able to sit unaided and finger feed herself. She never developed any words and needed assistance with all her activities of daily living. She was frequently unwell with respiratory infections and developed epilepsy. By Addison’s 3rd birthday she had lost all purposeful hand movements, lost the ability to sit and was now stuck in a body that she couldn’t control.

My husband and I were devastated with the diagnosis and heartbroken for our little girl who would never be able to do the things every child should. But the not knowing was worse, and with her diagnosis came a need to give her the best quality of life and provide a full and meaningful life.

So, our journey with the world of disability began, and that journey is rarely an easy one. But it’s the experiences with organisations, such as the ILC, along the way that can make it less daunting and help support what aspirations you have for your child.

Some of our very first visits to the ILC centred on equipment for Addison. Addison was fitted for her first wheelchair at the ILC. As you can imagine it was quite overwhelming for us, but we felt supported and informed in our choice of what was best for Addison. She also was fitted for her first standing frame which we were lucky enough to take home and try out, making sure it was a good fit for her and our home. We often felt like visiting the ILC a “one stop shop,” enabling us to make choices without having to visit several suppliers.

Addison’s communication journey started at the ILC which contributed to us providing that meaningful life that we wished for Addison. We started out with looking at switches and switching software to show Addison that she really had some power to have choice and make things happen. Addison still to this day uses her switch interfaces and switch with her iPad to tell news and events that happen in her life to her teachers and friends at school.

But our biggest breakthrough with autonomous communication was by trialling Eye Gaze technology with the help of the ILC. We were so excited about Addison having a voice like everyone else. We were supported to trial the device at home which in turn enabled us to prove the need for it in Addison’s life.

We have also received grants for several pieces of equipment over the years. We have been aided to purchase neck support equipment, an electric adjustable bed and IV stand – all of which support Addison’s positioning and in turn help us as her caregivers, care for her in a manner that is safe for her and us.

But the biggest difference for us was those pieces of equipment that would have been difficult to get funding for elsewhere. In a time when all equipment is decided upon as to whether it is necessary or essential, this equipment improved Addison’s quality of life and engagement in her community. And while it might not have been deemed necessary, it was something that meant a lot to us.

Addison’s P-Pod chair has been one piece of equipment that has allowed her to be comfortable, be seated with everyone else in the family and portable enough that it can be thrown in the back of the car and taken to different places.  Addison’s modified trike was also supported by an ILC grant. Addison loves going for rides, allowing her to get out and about while giving her legs range of motion exercise she couldn’t get elsewhere. 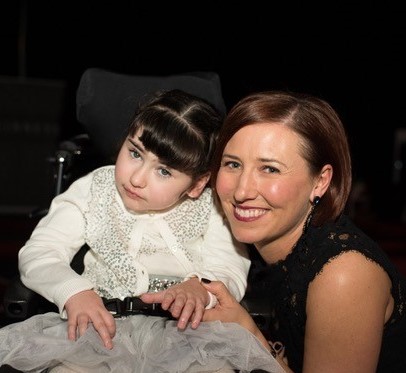 We were lucky enough to receive support to purchase our wheelchair accessible van. This has had a huge impact on the way that we transport Addison. She is now safer, closer to her parents in the front while hanging out with her sisters. She is totally involved in all the banter in the car and not stuck down the back.

As you can see, our journey with ILC has been a positive one for many reasons. Our appointments with staff were always organised – information was easy to attain, and it made me as a consumer feel confident that I was getting the right help and information. I always liked the fact that when I had an appointment, I always had written follow up with what my visit entailed that I could look back on. Sometimes appointments are overwhelming and it’s not until you take a breath and look again that you can really appreciate what was said.

And to reiterate an important point – while some equipment might not be seen as a necessity, they can be life changing to a child’s life. The ability to access the beach, go for a bike ride with their family or swim safely at the pools are some of the things that Addison has been able to do with the help of specialized equipment that were definitely “wants” rather than “needs”. These are the things that help Addison to be the vibrant young lady she is rather than just an extension of her profound disability.